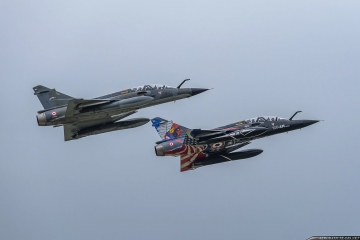 Ramex Delta flew for the last time during RIAT 2016 airshow, where I had the opportunity to watch their last ever display. The Ramex Delta tactical display duo was disbanded after the retirement of Mirage 2000N aircraft, which the duo flew.

The new team flies Mirage 2000D and named Couteau Delta will perform in several airshows in France and abroad from 2017 show season.