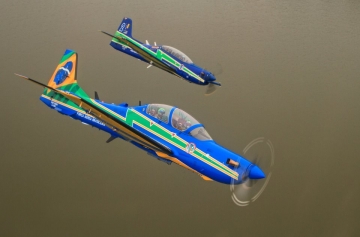 The Brazilian Air Force Demonstration Squadron presented on December 18, in Pirassununga (SP) team's home base, the new plane A-29 Super Tucano. This aircraft is an upgraded version of the T-27 Tucano, used in the team from 29 years.

A-29 have more powerful engine ensures max speed of 590km/h in difference of T-27, which have 457km/h. In addition, the Super Tucano is a little bigger than T-27.

The first two A-29' were delivered to the Smoke Squadron in October, as the total amount of 12 will be completed in 2013. Esquadrilha da Fumaca will start performing with new aircraft from the next airshow season.

In addition, the paint scheme has slightly changed mostly at the tail.