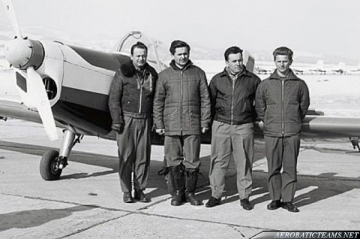 In 1960 at the Chrudim airfield in Czechoslovakia four civilian aerobatic pilots Tlusty, Struz, Bezak and Klimenda, flying with four Zlin 526 "Trener" planes, formed a display team named "Box Trener". Because of the communist regime during these times, the team's appearances are mainly in Czechoslovakia, even that Box Trener aerobatic team had many invitations from all over the Europe. Meanwhile the air demonstrations in the country were very rarely and so in 1982 the team was disbanded.

In 1989 after the political changes in Czechoslovakia and the new opportunities, the team was revived by the company Unimax, which became its sponsor. The team began its new era on Zlin 50 aircraft under the new name Unimax Devils. In 1990, changes were made to the team when Tlusty and Struz were joined by well-known solo pilot, Jiri Saller, and flight-pro, Daniel Polonec.

After a year the team change the sponsor to NTC Chrudim AG, and received new Zlin 50LX aircraft replaced the name of the team to Sky Box. In 1997, a new pilot joined the team: Miroslav Krejci, who took Bozej Struz's place, since he was forced to end his flying career for health reasons. In addition, the two companies DOVA Export Import and Airtrade Aircraft Sales also began sponsoring the team's displays.

In 1999 the Sky Box aerobatic team participated for the first time in Asia, during FAI World Grand Prix of Aviation airshows in Japan and China.

In 2001 the team obtained the sponsorship from the Red Bull receiving the name "Flying Bulls Aerobatics Team". In May same year the team performed for the first time under that name at AERO in Friedrichshafen, Germany.

In 2002 the founder and leader of the team Jiri Tlusty ended his active formation flying career. The new team's leader become the Radka Machova – this was the first time in the world where aerobatic team leaded by a woman ever.

In 2005 the Flying Bulls performed for the first time in Middle East in United Arab Emirates and Saudi Arabia.

In 2006 the team was at the opening of the Formula 1 Grand Prix in Bahrain. This was the beginning of a long tour in Abu Dhabi, Kuwait, Quatar, Doha, Rita, Jeddah, Amman in Jordan, Cyprus and Spain. After the tour a new slot pilot arrived - Jiri Veprek.

On Feb 10, 2011 the Flying Bulls performed for the first time at Aero India, which was the last airshow for the Indian Air Force aerobatic team Surya Kiran.

On February 19, 2015 two of the Flying Bulls Aerobatics Team Zlin-50LX aircraft collided in midair during Aero India defense expo in Bengaluru. The team performed a three ship maneuver while the team leader Radka Machova and left wingman Jiri Saller collided. The incident occurred at around 3 p.m. and over the runway. Both pilots succeed to land their badly damaged planes with no injuries. The incident leads to temporarily disbandment of the team, as later in 2015, a new leader and pilots joined the Flying Bulls Aerobatics Team. From the previous team’s pilots only Right Wing Miroslav Krejci stays at the new team.

The team begins to fly a brand new aerobatic aircraft XtremeAir XA42, first with three aircraft and fourth plane is added in 2016.