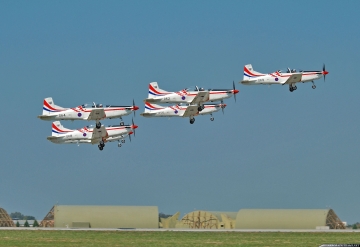 The airshow planned for June 4 – 5, and was dedicated to 100th Anniversary of the Turkish Air Force at Cigli Airbase near Izmir, was amazing. I was only on the first day June 4, but the weather and the display was very good.

First of the display teams was Croatian Air Force demonstration team Wings of Storm (Krila Oluje). They trilled the crow with its performance, but the most applause maneuver was the three planes tail slide. Three PC-9 planes of the team going up in 90 degrees until losing the speed and stall simultaneously. Sliding on the tail all three airplanes going down, until the pilots pull up again as one. The other very interesting maneuver of the team, was when five planes flying in tight formation, but inverted. The team's performance lasts about 25 minutes.

The second was the Polish Air Force aerobatic team White-Red Sparks (Bialo-Czerwone Iskry). Their display was about 20 minutes and includes nice formation aerobatics and solo performances with their five TS-11 Iskra aircraft.

Next one team was the mighty US Air Force Thunderbirds with six F-16C. One of the oldest and one of the best demonstration team in the world. Just before the take-off, the team's leader Lt Col Case Cunningham greetings the Turkish public for the Turkish Air Force Anniversary and for the strong relationships between USA and Turkey.

The amazing maneuver performed from the Thunderbirds was the loop of the diamond formation immediately after take off. A maneuver, which no other team do. In difference of the lasts years the squadron now use for demonstration only one seat versions of F-16C Block 52. Before 2010 season the squadron used two seat F-16D as a slot airplane.

After USAF Thunderbirds, in the air took off the Italian Air Force Frecce Tricolori, the biggest aerobatic team in the world. Watching how all ten Aermacci MB339 planes rolling in the sky as one is always beautiful.

The dazzling maneuver was the last one of their program, while the nine formation airplanes trailing the colors of Italian flag – red, white and green and the solo pilot #10 crosses this flag under the music performance of the Luciano Pavarotti. From that point of the airshow the weather condition became dusty, because of the too smoky aerobatic teams and the sea breeze also.

Patrouille de France was next, but the malfunction of the leader's plane delayed the team's demonstration with 20 minutes. The Patrouille de France's Alpha Jets rolled at the end of the taxiway, when the leader Athos 1, as it named in the team, Commandant Cedric Tranchon indicated problems with his helmet radio communication. Then he go back at the other site of the airfield and get the spare plane with tail number “0”. Probably the problem was not only in the helmet! Then he returns to the other seven planes to lead them into the skies of Cigli Air Base.

The most spectacular maneuvers performed by the both solo pilots. This was the turn performed in tight formation, while the lead solo inverted upside down and the barrel roll in the same formation. These maneuvers do not displayed on supersonic aircraft even from the famous Thunderbirds or Blue Angels.

Royal Air Force display team Red Arrows was next in the Turkey Air Show schedule program. Nothing other to say except brilliant performed air display, as always.

In addition, the last of the aerobatic teams was the Spanish Air Force Patrulla Aguila. I see for the first time Aguila's demonstration in live and was surprised. Very good performance except the two errors of outer right wing, who delay from the formation in two maneuvers.

The astonishing was the inverted loop performed by the solo pilot. The pilot inverted upside down his C101 Aviojet plane with Eagle (Aguila) painted on the tail, and start a full loop. No other jet aircraft performed such a maneuver, as I know. Moreover, in the final all seven Patrulla Aguila's airplanes landed in formation, a maneuver performed from almost every military aerobatic team in the past, but today, only Patrulla Aguila do.

Great disappointment was the missing Pakistan Air Force display team Sherdils. They were one of the first teams that confirmed participation at Izmir, but they do not came. The reason for this not announced.

The big amount of aerobatic teams was the main reason for which I came to Izmir to watch the airshow. Unfortunately spending time to shot the all teams and almost all maneuvers performed by them, I missed a lot of incredible displays of solo aircraft from Netherlands, Belgium, Pakistan, Austria, Romania, Italy and Turkey. I do not have an opportunity to watch the second airshow day, because we must leave the Izmir after our trip was planned only for the first day of the airshow.

Wish to thanks to Daniela Stoyanova from Bulgarian Air Force Foundation for the organization of this trip!