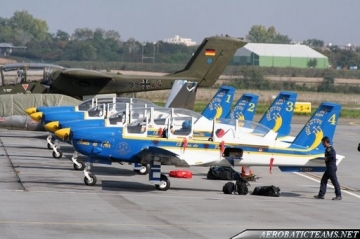 The occasion of 100,000 flying hours on the TB 30 Epsilon training plane was celebrated in Cognac airbase on 2 June 1989. For this special occasion, three pilots from the base formed an aerobatic team with three Epsilons for the celebration.

In 1994, during commemorative ceremonies for the Normandy invasion, the Cartouche Dore aerobatic team performed a display in a new paint scheme - overall white, blue and yellow, which has been retained to 2012.

In 1995, the team received permanent status and officially became a unit in the French Air Force. On 20 September 1996, "Cartouche Dore" made its 100th public demonstration.