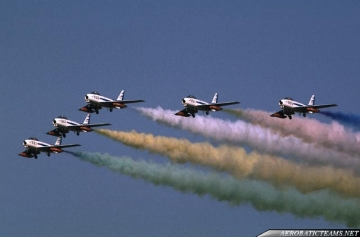 The first, unofficial, Japanese aerobatic display team was first created in 1958 at Hamamatsu air base. This team flew F-86F Sabre fighters which didn’t have any special color scheme. But, after just four demonstrations, this team was disbanded.

In 1959, the USAF “Thunderbirds” flying F-100 Super Sabres, visited Japan and inspired JASDF commanders to re-establish an official JASDF aerobatic display team. In 1960, a new team was created at Hamamatsu air base flying with five F-86F Sabre fighters. Three of the pilots were drawn from the previous Japanese display team.

The first demonstration of this new team, named “Tenryu” (after the name of the nearest river), was on 4 March 1960 at Hamamatsu. However, this name proved hard to pronounce in western languages, so the team was renamed “Blue Impulse”. The teams aircraft were equipped with smoke generators providing five different colors for each plane - white, red, blue, green and yellow. The team’s aircraft were initially painted in a silver, light blue, blue and pink color scheme but on the leader's aircraft, the blue color was replaced with gold.

In 1964, “Blue Impulse” performed at the opening of the Olympic Games in Tokyo and painted all five Olympic circles in the sky with smoke.

In February 1982, after 545 air demonstrations, “Blue Impulse” stopped using the F-86F Sabre and converted to six Japanese-built Mitsubishi T-2 trainers. The first airshow with these new aircraft was on 25 June 1982 at the team's new home in Matsushima air base.

On 14 November 1982, during a downward “bomb-burst” maneuver at a Hamamatsu air display, the team’s #4 aircraft didn’t succeed in recovering on time and crashed onto a building, killing both the pilot and 11 people on the ground (See crash video here). This accident halted the team's performances for the remainder of the year.

Bad luck again plagued the “Blue Impulse” when the team’s #2 and #4 aircraft both crashed during a training flight on 4 July 1991 over the Pacific Ocean. This disaster once again halted the team's performances for a year. “Blue Impulse’s” last performance with the T-2 aircraft was in December 1995, after 175 displays on type.

The new “Blue Impulse” aircraft were Japanese-built Kawasaki T-4 training jets. The team’s first show with these new aircraft was on 05 April 1996. In 1997, the team made its foreign debut at the Nellis AFB airshow in the USA.

On 4 July 2000, during a training flight, the team’s #5 and #6 aircraft crashed taking three pilot's lives. This accident occurred about 25 km east of the Matsushima air base.