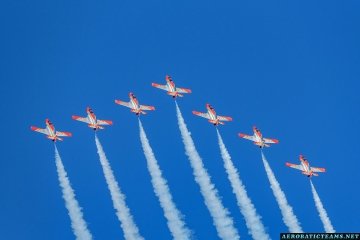 The AirPower16 airshow held on 2-3 September 2016 at Zeltweg, Austria.

After receiving a media accreditation, I had planned my travel with a car from Bulgaria, through Serbia, Hungary to Austria. This was unique journey, which I recommend everyone.

I arrived in Zeltweg early morning at 7’00 o’clock on Saturday, but following the heavy traffic to the Zeltweg airbase, I was able to get within the base at 8’20.

Team Orlik performed just in Saturday Sept. 2nd, while the Wings of Storm displayed only in Sunday. Wings of Storm aerobatic team performed last on Sunday, but I missed their display, as need to travel back avoiding the crowd.

The big surprise for me was the flying display of four Austrian Air Force SAAB 105 aircraft that reminds me to the former Karo AS aerobatic team. I want this SAAB 105 formation to become a real aerobatic team, as they performed formation loops and barrel rolls that some military teams did't.

The other formation flying was the four-ship formation of Red Bull aircraft: two Alpha Jets, one P-38 Lightning and one F4U-4 Corsair.

Despite the aerobatic teams, my big goal was to watch the aircraft, that I never see before in live. These unique aircraft were SAAB J35 Draken, SAAB J37 Viggen, SAAB 105, SAAB J29 Tunnan, de Havilland Vampire, Fokker D.VII, Messerschmitt Me262, Hawker Sea Fury.

At the second airshow day, during a high G turn, Belgian Air Force F-16 demo team received an apparent compressor stall that forced the pilot to cancel the demonstration and land safely. I missed to take photo of the incident as the F-16 was too far. First, we saw a big backfire from the nozzle and after a second, we hear a big bang sound. Suddenly all people get quiet until the pilot touch down the aircraft.

I will spare the other participants at the airshow as they were so many.