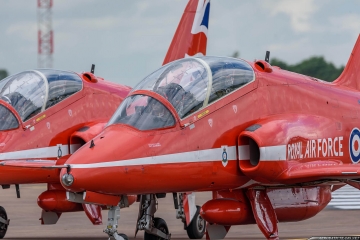 I was impressed by Orlik aerobatic team, which I see it for the first time ever.

However, the stars of the air show were the F-22 Raptor and F-35, the main reasons I choose to visit Air Tattoo airshow.

Unfortunately, the “South West Trains” railways interrupt my plans to visit the airshow on time. The way from Basingstoke to Swindon (70km) cost me a 5 hours of travel. Just insane!

Arriving at noon at the Fairford Air Base a missed the Royal Jordanian Falcons and Patrouille Suisse displays. I was disappointed to miss the display of Swiss Air Force aerobatic team after the crash in June.

The F-22 just took off when I was still in the bus, entering the Fairford Air Base. However, the Raptor interrupted the display due to malfunction, thus give me the opportunity to watch it later, unfortunately just take off and landing.

The other major star of the airshow was F-35. Not so impressive display, but the vertical landing and hovering was new to me.