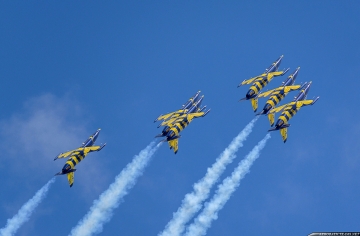 The Bucharest International Air Show took place on Baneasa airport and included a lot of participants from many European countries, as well as from Asia, including Pakistan.

What was unique about this show were the Romanian Air Force's MiG-21 aircraft demonstrations, which is one of the few events where this plane can still be seen flying. The Romanian Air Force did not just flyby with MiG-21s, but also did maneuvers like loops and rolls, as well as four-ship formations flying.

The most interesting part of the air show for me was the performance of three aerobatic display teams- Turkish Stars, Hawks of Romania and Baltic Bees. I had the opportunity to watch Baltic Bees for the first time, as I'm not taking into account that I was able to see only the landing of their arrival in Florennes Air Show in 2012.

Exactly with Baltic Bees aerobatic team I had the pleasure of spending almost the entire airshow day in their tent and to observe the preparation of the pilots before the demonstration, as well as the debriefing after that. For every airshow fan this is an unique experience which can hardly be described. For the first time this year, the team flew in a six plane formation with the newest pilot Robert Andrejev, flying on plane number 6.

The other interesting news was the Turkish Stars first female pilot - Major Esra Özata. She flew in the back seat of #4 NF-5B aircraft from 2015 show season.

Unfortunately, I had to leave early and missed the evening demonstration, but, oh well, maybe next year.