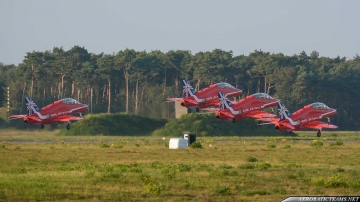 The Belgian Air Force Days Airshow held to 13-14 September 2014 at Kleine-Brogel Air Base, marked over 100 years of Military Air Power in and 40 years of F-16. The event featured most of the European and some Asian aerobatic teams such as Red Devils, Red Arrows, Al Fursan, Breitling Jet Team, PC-7 TEAM, Royal Jordanian Falcons, Patrouille de France and Frecce Tricolori. At the airshow participated many other aircraft and some of them unique as Bleriot XI and a drone aircraft.

12 September was the spotters' day. The weather was perfect, but not the organization of the airshow. There was no spotters' or press' spot when we could take good view to the landing and takeoff aircraft.

At 15:00 o'clock, the first aerobatic team for the day was Frecce Tricolori, which used only white smoke, spending the colors for the public days.

At 17:00, The Breitling Jet Team arrived at Kleine Brogel Air Base, but did not perform a rehearsal.

The PC-7 TEAM flybys in formation with Swiss Air Force Super Puma helicopter, followed by the display of the Super Puma. Next was the PC-7 TEAM rehearsal, which interrupted by the incoming French Marine Rafals, which declared low fuel and need to land immediately.

Next was The Victors, a Belgian civil aerobatic team flying four Piper prop aircraft. I saw them for the first time and was impressed by their skills holding tight formation in different maneuvers and turns.

Ramex Delta was the next display team, who did a rehearsal, but I had already saw them in Salon de Provence Airshow a year ago.

Royal Jordanian Falcons aerobatic team, who flew three aircraft this year, instead of the normal four-ship formation not flies that day. Probably, because of a plane malfunction. Al Fursan display team also did not fly due to an aircraft malfunction.

The morning of day 2 was foggy, but by noon the weather got better, and thus began full demonstrations of aerobatic teams. Frecce Tricolori team was first again. Shortly after they complete its display, The Royal Jordanian Falcons took off that I watched for the first time and unfortunately flying three aircraft only.

Finally at 17'00, the team for whom I had come to the Belgian Air Force Days Airshow, Al Fursan took off and perform a truly amazing demonstration. Much impression for me was the very dense smoke that used unlike other teams.

There was also demonstration of the Red Devils as the day finished with a brilliant flying of Red Arrows.

On September 14, the fog was a bad friend of flying again, but despite this, the flights started around 10'30 with displays of T-28B Trojan and Hawker Hunter aircraft. First of the display teams were Red Arrows, because they often fly in foggy weather in UK. Red Arrows performed a flat display, because of poor visibility. Later in the day, they flew back to UK, but one of the aircraft received malfunction during taxiing and remained in Kleine Brogel airbase for further inspection.

When Red Arrows landed, Patrouille de France aerobatic team arrived, as they were at Kleine Brogel on 11 September for recognition flights, but during spotters day they departed back to France for an airshow.

In the last day of Belgian Air Force Days airshow flew all aerobatic teams except Royal Jordanian Falcons, as the day ended with a display of Al Fursan, which ended at sunset.