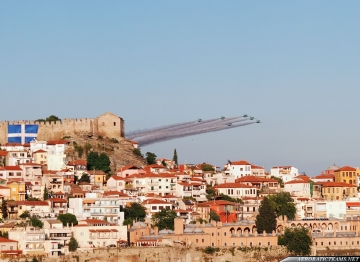 Kavala Air and Sea Show held on 20, 21 and 22 June 2014 at the Kavala, Greece. The most unique at this airshow is not only that the displays are performed over the sea, but at the sunset time also.

The 20th June, Friday airshow starts about 19:00 o'clock with the flypast of a two A-7 Corsair aircraft from Hellenic Air Force. Of course, this was the time when I arrived at the air show site, as I became a little late. Then followed the display of F-16 Block 52+ Demo Team Zeus, again from Hellenic Air Force. At 19:45 the Saudi Hawks display team came from the direction of Thasos Island. Their display lasts about 20 minutes. Next was the display of 3 RV aircraft from Italy and in 20:20 one of the stars of the show came from behind the city hills – AH-64A Apache from Hellenic Army. The display of that combat helicopter was amazing. Flying just about few meters over the houses of Kavala, hover over the seaport in front of the public, again in few meters, Apache wowed not just me, but everyone who watched this "crazy" display.

After AH-64 display, an F-406 aircraft from Hellenic Coast Guard performed couple of flypsats and the last was an AB-212 ASW hellicopter from Hellenic NAVY.

The second day of the airshow 21 July, offers one more aerobatic team – Pioneer Team, which is an Italian civil team flying four Pioneer 330 propeller planes. The Pioneer Team performed very good airshow trailed smoke and sparkling fireworks from the wings pods of all four aircraft. Amazing scene, especially when it performed after the sunset.

The last day of the Kavala Air Sea Show 2014 was 22 July Sunday, but this time the displays starts at 13:00 with Saudi Hawks aerobatic team, despite that was announced to begin in 12:00. After them followed the Pioneer Team and at the final a solo display of Serbian Galeb G-2 aircraft.