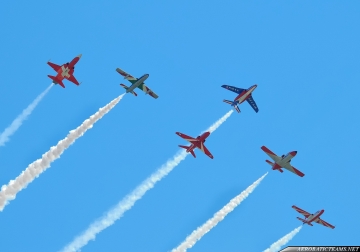 The airshow was dedicated to the 60th Anniversary of the Patrouille de France and it was held on 25 and 26 May at the team's home base in Salon de Provence. May 26 was the day when public could come and see the show, while May 25 was an official press day for journalists and media representatives and specially invited guests. The event included almost all aerobatic teams from Europe: Patrouille de France, Patrouille Suisse, Patrulla Aguila, Red Arrows, Frecce Tricolori, Iskry, Red Devils and Cartouche Dore. Russian Air Force aerobatic team Swifts was also invited, but, unfortunately, a few days before the show they cancelled their participation.

My journey to the show started on May 23, thanks to Konica Minolta Business Solutions Bulgaria and its sponsorship, when I left Sofia and flew away to France with all the way through Italy, Milan and finally the point of destination – Marseille was reached and it was just about 50km away from Salon de Provence. The next day I had a chance to roll through the streets of Marseille and get to know the local place and culture and I was already thrilled and looking forward to the spectacular airshow.

So, the day was 25th of May, and I started the long-awaited trip to the biggest event of the year in the world of aerobatic teams. Early in the morning I took a train from Marseille to Salon de Provence, and after about one hour ride, which was along the coast, I arrived at the little train station Salon. I took a bus number 3 from there to the airbase "Base Aérienne 701". When I arrived at the main entrance of the base I received my press card, but some issues arose, because since I was without a car and it was a kind of an obstacle for my mobility. But thanks to Adrian Campbell from PlanesTV and his little car, I managed to get in and join the place for press and media.

The weather was not very favorable for this kind of events, because a strong wind was blowing more than 10m/s and the rain was coming.

However, airshow began around 10:30 with a flight of a glider. Then EC 725 Caracal helicopter was demonstrated. After it the Equipe de Voltige with Extra 300 came to the scene.

Finally, at 11:20 the first aerobatic team of the day Cartouche Dore with three Epsilon TB30 aircraft flew to its 20 minute demonstration. After that, number 9 aircraft of Patrouille de France flew in formation with CM170 Fouga Magister and then CM170 presented its capabilities in air doing solo aerobatics. Then the show was interrupted due to the bad weather and it had to be stopped, because of the rain. Meanwhile, Polish Air Force aerobatic team Iskry with its four TS-11 aircraft ready to take off, but the team was forced to stop their demonstration, as weather did not promise anything good in a while.

Once the weather cleared, the show continued with a demonstration of two Mirage 2000N aircraft from Ramex Delta group of French Air Force, followed by the Belgian Air Force display team Red Devils with their four SF260 planes. At the end of the Red Devils' demonstration, the rain came back, but anyway it was time to lunch.

At 14:00 the weather was quite promising and demonstrations returned with the flight of the Spanish Air Force display team Patrulla Aguila flying seven C-101 Aviojet aircraft. After them the demonstration of the Patrouille Suisse flying six F-5E Tiger II fighters was presented to the audience, followed with the demonstrations of Frecce Tricolori, Airbus A400M, Red Arrows, Rafale and finally the team of the hosted country Patrouille de France. Thus, the first day of the airshow dedicated to the 60th Anniversary of the Patrouille de France finished at 18:20.

There was a quite long adventure on my way back to Marseille, but it is not the subject of this reportage.

The next day, May 26, many people came, as expected, but when I say a lot, this means really a huge crowd of people. According to the official data the visitors were over 100 000 people, something that no rock or pop stars can brag about.

This time the weather was clear, the sky was just perfect with no cloud, but only the wind was the only reminder of a previous day. The program was almost the similar to the previous day, with the difference that Iskry display team flew with only four planes. The last time when I saw them it was in 2011 in Izmir and then they flew with 6 airplanes. The joint flight of six aircraft from each jet aerobatic team participating in the show was another pleasant surprise. The Belgian F-16 also was the part of the public day show.

Again, the show ended at 18:20, and then it was time to leave the base, which was a real nightmare considering the size of the crowd, which was leaving the show.