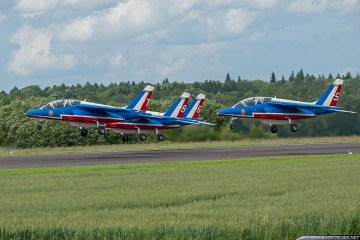 This year The Belgian International Airshow held on 23 and 24 June at Florennes Airbase. I was invited to visit the show from 22 to 24 June, and on 21 arrived at Charleroi airport, about 80km south from Brussels. Then I traveled to Belgium capitol to visit and stay as a guest to friends of mine. On the next day, 22 June I took the car of my friends and went to Florennes. After an hour, I arrived in Florennes Airbase about 10AM, and went through the main gate, but missed the way guiding to the press office. Soon walking down to the nearest static display planes spot and realised that I am not where should be. The military police went to me and ask to stay at place. After a few minutes, they came back with a van and went me to the right position at the press spot, right near the runaway.

I have already missed the rehearsal of Wings of Storm team, but unfortunately the Red Devils practice also, which I never see them in flight before. Then the planes, which have to participate at the air show, start arriving.

Despite the bad weather with a lot of clouds and wind, the arriving and followed rehearsals were cool. I have never seen before the Cartouche Dore and Baltic Bees aerobatic teams. Unfortunately the Baltic Bees arrived too late and do not performed a rehearsal. The other disappointment for me was the lack of Royal Jordanian Falcons, which did not arrived in Florennes. The other display teams, which participate at Belgian International Airshow were: Patrouille de France (replacing the Patrulla Aguila in last weeks and performed just in Saturday), PC-7 TEAM, Red Devils and Wings of Storm. Here should be mentioned the Belgian Air Force Smoke Formation flying six Alpha Jet aircraft, which is almost an aerobatic team, as they fly in close formation and releasing national color smokes, but still not perform loops and barrel rolls. Hope soon they become real display team.

About 8PM, I go back to my car, missing the Solo Turk F-16 display, which already seen it at Izmir last year, and returned to Brussels to watch Germany and Greece on EURO 2012.

On 23 June Saturday, the first public day, the weather was much clearer, but my car was broken, so I delayed my visit to Sunday. Very wrong decision as the weather in Sunday was awful, low clouds and rain. So missing the Saturday show and missing the Sunday ones, I cannot see the Red Devils and Baltic Bees display at all. Next time!

Special thanks to Alina and Walter.