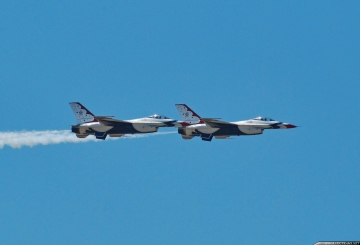 The USAF demonstration squadron Thunderbirds arrived today at Graf Ignatievo airbase, near Plovdiv, Bulgaria, to participate in demonstration on June 25.

The whole aerobatic team arrived at 14'00 local time in eight ship formation. After 40min of recognition flights over the airfield, the all Thunderbirds F-16s landed. We wait to the June 25, when the team displayed in front of the Bulgarian public.

The third day of the Thunderbirds visit in Bulgaria, the public show day, was unlucky. The poor rainy weather and strong wing forced the team to demonstrate flat show. All six F-16s takes off one by one and rejoin in the air, depriving the Bulgarian public to see, the unique maneuver of the Thunderbirds "loop after take-off". Moreover, after 20 minutes of the air show, the weather conditions become worse and the Thunderbirds cancel the airshow, almost. Only both solos landed, but the main diamond formation remains in the air for about 20 minutes. After that, the weather cleared a while, so the "Diamond" performed a few flat maneuvers and landed.

This was the third demonstration of the Thunderbirds in Bulgaria, and as the last one in 2007, bad luck follows the team. Then during the airshow on July 1, Thunderbird #2 hit a bird with his canopy, forced him to interrupt the show and land for a damage check. Meanwhile after a 15 min, he takes off again and the show continued.

Despite this nature's behavior, the Thunderbirds again represent itself as one of the best demonstration squadrons in the world.