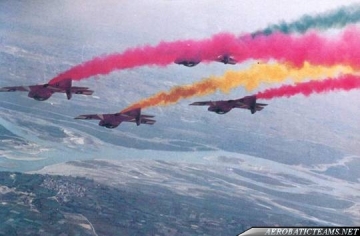 On September 19, 1974, the team performed under the name "Sherdils" for the first time, with four red-painted T-37's.

On October 8, 1978 during practice flight, the team leader, Flt Lt Alamdar Hussain, collided in mid-air with Flt Lt Tansneem Muzzafar, whose flying slot. Following the collision the Leader's plane crashed killing his pilot. The slot pilot survived the accident. The other pilots in the diamond during the accident were Flt Lt Irfan Masum #3 Left Wing and Flt Lt Shahid Nisar #2 Right Wing.

In 1980, another two aircraft were added to the team, growing the "Sherdils" to their present six-ship formation size. In addition, the team's planes were repainted to their current color scheme - white, red and blue. Later, the team's aircraft were each equipped with smoke generators, capable of releasing red, orange and green smoke.

At the beginning of 21st century, the "Sherdils" formation sometimes expanded to nine planes, but not consistently every time that they performed.

On November 18, 2009, the "Sherdils" transitioned to the brand new China-Pakistan built K-8 Karakorum jet trainer and performed for the first time during the PAF Academy Graduation Parade. The team reverted to a six-ship formation at this point.