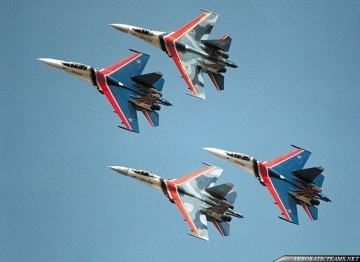 In June 1992 the team visited USA and Canada, making great impression on the public watched their display.

On Dec 12, 1995 Russian Knights suffered the most terrible accident in its history. During returning from Malaysian LIMA'95 airshow, the team going to land for refueling in Vietnam airbase Kam Ran. The formation was leaded from IL-76 transport plane. The IL-76 pilot leaded the formation in wrong right turn direction to the airfield - straight to the nearest mountain. Reason was density fog weather condition. All three Russian Knights airplanes (2 Su-27 and 1 Su-27UB) from the right side, crashed onto mountain, killing four pilots. Other team planes and IL-76 succeed to avoid the impact and land on the Kam Ran airfield. On October 1996 on the tragedy spot was raised monument about four fallen Russian Knights pilots.

In 1996 the team flew again but with only four planes. A year later on June 21, when team arrived to take part in SAID'97 airshow in Bratislava, Slovakia, one of the Russian Knights aircraft suffered in belly-landing crash, while its pilot forgot to set gears down. On the next day, Russian Knights performed with three planes. The crashed plane gets minor damages and shortly was repaired.

In 2002 Strizhi and Russian Knights start to training in jointly formation of four planes of each team to fly-passed during Red Square parade. We must note that, when both Russian Knights and Swifts flew together, they don't performed loops and barrel rolls.

During 2003 one of the newest Russian multi-role fighter Su-35 was painted in Russian Knights colors, but don't take part in formation flying. The team's pilots have mastered Su-35, but now this aircraft do not fly at all and stay on the parking area as exhibits. Until now was renown that this plane flew just in some air events in solo display.

In March 2003 the Russian Knights aerobatic team together with the Swifts aerobatic team displayed their joint formation flight of ten aircraft (4 Su-27 and 6 MiG-29) dated to the 65th anniversary of the Aircraft Demonstration Center.

In 2004 the big joint diamond formation of the Russian Knights and the Swifts aerobatic teams included nine aircraft (5 Su-27 and 4 MiG-29) with the display of the whole complex of aerobatic stunts was included in demonstration program. This fact has become the world record in the history of aviation. This new formation unofficially called Kubinka Diamond.

On May 9, 2005 the Russian Knights aerobatic team together with the Swifts aerobatic team displayed their joint formation flight over the Red Square included nine aircraft dated to the 60th anniversary of the World War II victory.

On April 5, 2006 the Russian Knights aerobatic team celebrated its 15th anniversary with a great show at Kubinka airbase.

Continuing the great traditions of air military parades on May 9, 2007 the Russian Knights and the Swifts aerobatic teams displayed their joint formation flight over the Red Square with nine aircraft.

On Aug 16, 2009 two of the Russian Knights aircraft crashed, killing team leader, 45 years old Colonel Igor Tkachenko. The two Russian Knights - Su-27 and Su-27UB collided in mid-air during practice flight in preparation for the MAKS 09 airshow. Last evidence indicated, that left wingman Col. Vitaly Melnik, flying on Su-27 board number 14, flew through the nose of leader's Su-27UB, while the team assembled after a break maneuver.

The four Russian Knight's Su-27 performing practice flight that day together with four Swift's MiG-29. In fact there was be a fifth Su-27, but malfunction after take-off push it to land. After the Russian Knights and Swifts eight-ship practice, the two teams break the formation for their own separate display. The Russian Knights starts its break maneuver, when the leader Col. Igor Tkachenko and Col. Igor Kurilenko flying on two seat Su-27UB board number 18, begin to loop followed by the slot plane, while the left and right wing begin to turn in left and right. They must be assembled at one point at 1000 meters altitude, but Melnik coming from left too quickly an early at that point hitting with his nozzles the nose and cockpit of the leader's Su-27UB, which nose break from the plane's fuselage.

Melnik's Su-27 nozzle burn in flames and he ejected safely. From the other plane just Kurilenko succeed to eject. Tkachenko, who was at the first cockpit, continue falling together with the plane and strikes the house of the near village. Probably the mid-air strike injured Tkachenko, who lose consciousness and he don't made attempt to eject. He dies and one woman on ground also dies after few days, because of burn injures.