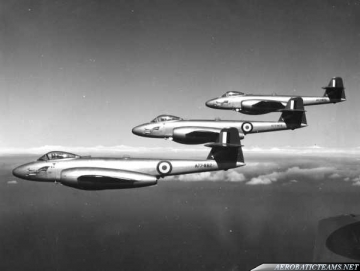 In 1961 were formed the Black Diamonds flying on 4 CA-27 Sabre aircraft. This team from 75th squadron exists untill 1964 when the 75th squadron begins to fly with Mirage 3.

In 1962 to the Central Flying School of the Royal Air Forces of Australia based in East Sale (near Melbourne) were established three aerobatic teams. One of them exists in the present days - the Roulettes. The two other teams were called respectively Red Sales and Telstars. Red Sales display team occurred in a crash during diamond barrel roll (More about Red Sales here). In 1970 was formed Deltas aerobatic team flying on six Mirage III at Williamtown, and did displays around Australia for the RAAF 50th Anniversary in 1971.

The Roulettes perform their first public air demonstration in December 1970 in Point Cook airbase. The demonstration itself is a prelude to the celebrations of the Golden Anniversary of the Royal Air Forces of Australia in 1971. (The first air force unit in Australia is created in 1911 under the name "Aviation Corps". It includes two pilots and three mechanics. In 1922 the formation separates as a self-dependent kind of military forces.) By those times the team flies on four Aermacchi MB326 training jet aircraft. The name the team receives is taken from the most spectaculars figure it performs - roulette. The demonstration of the Roulettes lasts eight minutes. In the end of 1973 to the team is added fifth aircraft. The first demonstration in public with five airplanes is performed in March 1974 in Point Cook airbase during the parade for the promotion of the new graduates in the Air Academy. The fifth airplane flies solo and joins the main four while performing some figures. The main four, itself splits onto two synchro pairs.

In 1975 the team demonstrates for a first time its abilities in a foreign country - during the celebrations of the Papua-New Guinnea's Independence Day.

In 1981 because of the Diamond Jubilee of the Royal Air Forces of Australia the Roulettes fly on seven aircraft. Their demonstration lasts 16 minutes. In April the same year they perform their last demonstration on seven airplanes. After that they return to the usual five planes formation.

In December 1983 during a training flight in East Sale airbase two of the team's aircraft (carrying numbers 2 and 3) collide in the air. The two pilots die.

In 11 March 1988 during a training flight in East Sale airbase two of the team's aircraft (carrying numbers 1 and 4) collide in the air. The pilot of Number 4 ejects successfully and the pilot of Number 1 succeeds in his attempt to land the airplane "on the belly". Because of that accident the Roulettes perform their first demonstration in public only in August. Watch video here.

For a first time the Roulettes participate in the north hemisphere in February and March 1992 when they perform demonstrations in some Asian airshows.

On 21 january 2005 two Roulettes planes collided in mid-air during a practice. One of the planes crashed in flames in Victoria while the other plane piloted by Flight Lieutenant Mark Ellis, 33, landed safely.