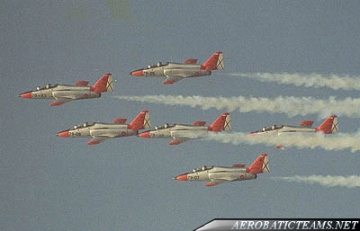 The next year at the Jet Training Air School, an aerobatic team was established flying with T-33 Silver Star jets. After this school transitioned to new F-5 fighters, this team was moved to Zaragoza.

In 1980, an aerobatic team flying with Mirage F-1s from the Albacente Air Base was created. This team flew until 1987 when it was disbanded.

Early on the morning of June 4, 1985, five Spanish-built CASA C-101 Aviojet training jets, took off from San Javier Air Base, to assess the capabilities of these aircraft to fly in close formation. The pilots were from the General Air Academy, and the initiator of this test was Capt. Carrizosa. After just 10 days, a new team made its first public demonstration with four C-101s at the Jerez de la Frontera Air Base, under the name "Patrulla Aguila" (Eagle Patrol). The planes were painted in standard trainer silver and red paint scheme. In a second demonstration, they flew with five aircraft, and then in the third, with six Aviojet aircraft.

On July 16, 1986, "Patrulla Aguila" visited a foreign country, Belgium, for the first time.

For the next year, the team started to use smoke, but at first only on three planes from main four-ship formation, excluding the leader's plane, and only with white smoke, because previous trials of colored smoke had failed. Later that year, they also visited England for an Air Tattoo.

On April 11, 1988, the team performed an airshow for their Majesty's, the King and Queen of Spain, at the General Air Academy in San Javier. In that show, team flew seven aircraft with all of them using white smoke. Later in that same year, the team's pilots received blue flying suits, which became their official uniform.

In October 1991, the "Patrulla Aguila" C-101 aircraft received their present paint scheme, which was inspired from a Spanish aerobatic team in the past, the "Patrulla Ascua".

In May 8, 1992, the team finally started to use red and yellow smoke, but only on four of the aircraft. Later in that same year, "Patrulla Aguila" took part in opening ceremonies of the Olympic Games in Barcelona.

By the end of 1992 show season, all of the team's aircraft started to use colored smoke. In 1993, Prince Philip was made an honorary member of the team.