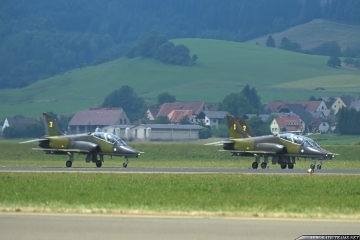 Demonstrations of formation flying in the Finnish Air Force had its beginning prior to World War II, when a formation of ten Gloster Gamecocks biplanes from the Air Force Academy, performed at the “Midnight Sun” air show in Kauhava air base.

After the war, the Finland Air Force carried on with the same tradition, progressively displaying through the years on Saab Safir, Fouga Magister, Valmet Vinka, and BAe Hawk Mk 51 aircraft. These displays were always flown by instructors from Finnish Air Force Academy.

To celebrate a 90th anniversary, four Hawk Mk.51 jet training aircraft from Academy, began to display not only at the Midnight Sun Air Show, but in the other aviation celebrations throughout Finland. Later in 1997, during the Oulu International Airshow, the team were given the name “Midnight Hawks”.

In the 2008 season, the Midnight Hawks aerobatic team began to use smoke pods attached to pylons on each wing to accentuate their display. The first practice with these pods was on 17 June 2008, while the first actual display use occurred three days later at the “Midnight Sun” airshow.