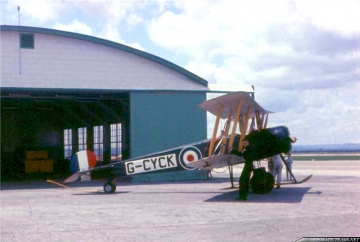 Back just before Canada’s Centennial year of 1967, it was decided by the Royal Canadian Air Force that an aerobatic team would be formed with which to display to the Canadian public it’s Air Force in action.  The previous team had been the Golden Hawks of the 1950’s.

Rather that the F86 Sabre flown back then, the chosen formation aircraft was the new Canadair CT-114 Tutor trainer.  To these were two of Canada’s front-line fighters, the CF-101 Voodoo interceptor, and the CF-104 Super Starfighter strike aircraft.  It was then decided that something slower should be added to demonstrate the advances made in the RCAF through the years.

Back in 1920, Canada was presented an Imperial Gift of 62 of the AVRO 504K trainer aircraft.  These were used mainly at Camp Borden, Ontario to train pilots of the still-fledging Canadian Air Force (later to become the Royal Canadian Air Force).  It was this aircraft that was chosen.

Two AVROs were purchased as project aircraft from the United States.  One which was built as G-CYCK from J.S. Appleby of California, and the other, FG, from Cole Palen of Rhinebach, New York.  It was hoped that both would just require light repairs to make them airworthy.

Both were delivered to the Project Chief, Warrant Officer Harry Tate at #6 Repair Depot at RCAF Station Trenton, Ontario, in May of 1966.  The hopes for an easy restoration were dashed upon their arrival.  Both aircraft were literal basket cases. Both required extensive restoration.

Work commenced immediately on G-CYCK, while FG was in such sad shape it was decided to completely build a second airworthy AVRO 504K, and to use the left over bits and pieces to assemble FG in as authentic a way as possible for the display AVRO 504K that would be placed in the Canadian Aviation & Space Museum in Ottawa.

While work on G-CYCK was underway, the plans for the aircraft were obtained from England and the second flier, G-CYEI, was built from them.  CK & FG used many of the metal fittings from the two purchased aircraft, while EI was completely new build.

In November of 1966, G-CYCY made its initial test flight at Trenton.  The aircraft flew tail-heavy and after much adjustment, it was decided to add 30 lbs of counterweight to the skid end of the forward undercarriage “Vee” struts.  This decision became a major factor in a later crash.

In order for the AVRO 504Ks to be moved between air shows, the wings were removed and hung in specially designed travel racks.  The fuselage would be loaded aboard a Hercules transport with the pilot and one crewman.  Upon reaching the destination, the pilot would proceed to arrange the team accommodation while the crewman installed and rigged the wing center section.  The Hercules would return to the departure site and pick up the wings in their travel stand, then return to where the fuselage was.  The wings would then be mounted, the aircraft rigged, and a test flight carried out.

After the initial test flights, the G-CYCK was dismantled and shipped via Hercules transport to the Team home base at Portage La Prairie, Manitoba.  There it was reassembled.  The day of the first flight there was typical Canadian prairie . . . clear and very cold.  Getting the installed Rotary engine started in the extreme temperature proved impossible and the aircraft was finally started by having it positioned in the hangar under one of the overhead heater units.  With the crew holding each wingtip to provide braking, G-CYCK was taxied out and flown.  It proved to be the only flight at Portage that winter.  The aircraft performed well, but being an open cockpit, with no heat, in November in Portage proved to be too much for pilot, F/L Gord Brown.  The Team CO, O.B. Phelp immediately arranged for the aircraft to be moved out to the Pat Bay Airport on Vancouver Island.  There it was housed with the Royal Canadian Navy’s VU-33 squadron.  It was in the skies over the island that an aerobatic routine for the AVRO 504K was worked out.  Before long, the second AVRO 504K, G-CYEI was completed and arrived.

And it was here that the one big problem foreseen by the team members showed.  The desire to have the aircraft built as a complete replica resulted in the fitting of the original Le Rhone rotary engine.  There was no modern rotary engine available, so various museum and collections were scoured for them.  A number were located and obtained.  In an attempt to have some spares, WO Harry Tate traveled to California where he arranged the making of a number of sets of pistons, as well as the #6 RD workshops turning out smaller items such as exhaust valve guides.  Through the work-up period at Pat Bay, and then constantly through the flying schedule in 1967, performance after performance by both aircraft were cancelled due to engines that performed badly or didn’t perform at all.  Engine changes, which at the start took two or more hours to do, became so common-place that the crew on both aircraft had it down to a half-hour job.

The pilot of G-CYEI was F/L George Greff.  In one case, his engine quit during a practice that resulted in him having to make an emergency landing on the down slope of a muddy, rutted field.  F/L Gord Brown had his heart-stopping experience over Lake Ontario during the Canadian National Exhibitio.  His engine stopped but through some frantic maneuvering, he was able to get the engine running again with mere feet to the surface.  Both pilots endured several of these moments through the year.  A rough running engine would be taken out and returned to the crew back in Trenton for overhaul.  The replacement would prove to be as bad or worse. In many cases, the engine removed would be rushed through overhaul and send back.

In July of 1967, G-CYCK was in Ottawa for the big Centennial Air Show at RCAF Station Rockcliffe.  The aircraft was assembled at the Uplands field, and F/L Gord Brown took off on the usual test flight.  He flew over to Rockcliffe to examine the field there.  During a “roller” landing, the previously mentioned weights mounted at the skid end of the undercarriage “Vee” struts hit a hummock in the field.  This caused the skid to break, then dig in and the aircraft crashed.  The resulting damage was the undercarriage, propeller, engine, and forward fuselage being written off, and damage to both upper and lower wings.  The aircraft was dismantled, trucked back to Trenton, and underwent six weeks of repair.  During the rebuild, it was discovered that the verier block which adjusted the tailplane had been installed incorrectly during Cole Palen’s restoration.  After being installed correctly, the aircraft could be flown “hands off”.

G-CYCK and G-CYEI flew together only a couple of times during the summer of 1967, once at the opening of Expo in Montreal, and the second time at the Abbotsford International Air Show in B.C.

At the end of the year came the disbanding of the Golden Centennaires, and the AVRO 504Ks were placed in storage at the Canadian Aviation & Space Museum in Ottawa.  G-CYCK was kept in an airworthy state for several years, but now resides in one of the Heritage Hangars at CFB Camp Borden, Ontario.  G-CYEI was traded to the USAF Museum in Dayton, Ohio, where it now sits, refurbished as a USAAF trainer as flown in France.  FG was completed from parts left over and is the hangar exhibit aircraft at CASM.  It was been fitted with the Variable-pitch Pitch Propeller as developed by Rupert Wallace Turnbull, and which design is fitted to most of the world’s propeller-driven aircraft today.