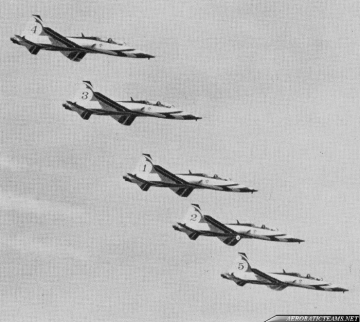 On January 18, 1982, during a training flight, four of Thunderbirds T-38 Talon aircraft crashed at Indian Springs, Nevada. The Diamond performed loop in a line abreast formation, when the leader's plane received mechanical failure, which does not allow it to exit from loop. This time they practicing line abreast maneuver just in four aircraft.

Other three pilots follows the leader until they crash on the ground. These fallen Thunderbirds were Major Norm Lowry, 37, Commander and Leader, Captain Willie Mays, 32, Left Wing, Captain Joseph 'Pete' Peterson, 32, Right Wing, and Captain Mark E. Melancon, 31, Slot. Those brave pilots lost their lives in preparation for the 1982 show season. They are gone, but not forgotten.

The "Diamond Crash" is one of the biggest tragedies of the team’s history. The crash interrupted the demonstrations of the Thunderbirds for 14 months since April 2, 1983, when they flew again, but this time with new aircraft - General Dynamics F-16A Fighting Falcon.