What had to have caused the Reno crash 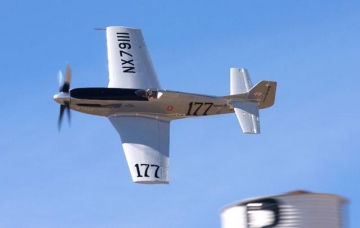 Jim Howe here, age 74 from Placerville. Been flying small planes for over 56 years and had six years of aeronautical studies in the 50's. After studying the photos, facts, and physics on this accident for over three hours, everything came together for me as to what 'must' have happened. Feel free to run it by any pilots or engineers you know, as what I'm about to tell you is backed up by pictures, observations, and the laws of flight.

OK, lets go over what was observed, and what the pictures show: He's coming around the final pylon at least doing 450mph. Fast whether it was 425 or 475. Next, the airplane pitches up quickly and violently and goes straight up 300, 400, or 500 ft. (exact distance doesn't matter...it went UP, quickly). Next, at the top of the climb when the airplane ran out of momentum, the airplane did a lazy torque roll of some sort, and came straight down STILL at full power with the retractable tail wheel and doors extended. (strange?) We all know what tragically happed when it slammed into the ground.

Here's the interesting part that no one I know of has commented on or analyzed. Pictures clearly show several things. 1) The clear picture of the airplane coming down shows NO pilots head in the canopy. (So where is he?) There is a clear picture from under the airplane showing the elevator trim tab mostly loose and coming off. The NTSB guy said they found it on the ground near where the picture was taken. What happens when an airplane turns sharply. The Thunderbird guys wear special 'G' suits that expand so they can stand the 'G' forces when they do their routine. So, the faster you are going, and the sharper you turn, the more the 'G' forces are. After 5 or 6 'G's you can black out without those special 'G' suits. Jimmy Leeward did not wear one.

Now that you know what took place, here's what had to have happened to the pilot knowing what we know above. It's what apparently no one has concluded. Here we go: The airplane pitched up violently either because the damaged elevator went up 5 or 10 degrees and pushed the nose to vertical, or the pilot sensed elevator flutter (very dangerous) and pulled back on the stick to climb and get out of traffic and call 'May Day'. BUT, the sudden change from 450 some mph to vertical in a split second HAD to have put 10 or 12 'G's on the pilot's body. At that time the 'G's on the tail as the airplane turned vertical popped out the retractable tail wheel and little gear doors. The pilot would have for sure blacked out...AND, the (say 10 'G's) would have pushed the pilot's body back against the seat with a force 10 times the pilots weight! If the pilot weighed 230lbs, the force against the back of the seat would have been 2300lbs! The 'probably custom' seat was most likely engineered for 5 or 6 'G's at the most, so it HAD to break off the floor and go BACKWARDS with the pilot in it to the area behind the seat where his head would no longer be visible in the canopy! The sad part is, the airplane structure at the top behind the seat is NOT high enough for his head to go under in a sitting position as he is violently pushed backwards. I can only conclude that his head with his helmet on it was pushed with great force onto his chest, 'probably' breaking his neck. We may never know. But we must conclude he was pushed BEHIND the normal seat position out of sight, as his head/helmet is NOT visible in the picture taken as he was about one second from impact. Don't forget, his five point shoulder/ waist restraint harness kept him from going FORWARD, NOT backward! If he were alive and conscious and in his 'regular' seat position on the way down he would have pulled all power and pulled the stick back to recover from the 'death dive'. He couldn't do either because he was blacked out (or worse), and was crammed in the fuselage area behind the normal seat position.

That's my analysis, and conclusion.

I published this article despite this was not aerobatic teams' crash. Reno crash will affect all airshows in USA and all demonstration teams.