Black Eagles to fly at many European airshows in 2022 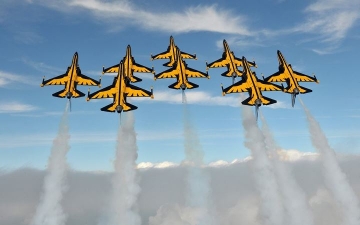 The team will fly at Southport Air Show, Royal International Air Tattoo and Farnborough Airshow in UK between July 9-22. Later the team will display at Poland and Slovakia, but no locations and dates were announced yet. More European airshow locations are likely to be added later to the tour.

The last and only European appearance of the team was in 2012 where the team performed just in UK.

All eight team’s T-50B aircraft plus one spare will be disassembled and transported to Europe by air.