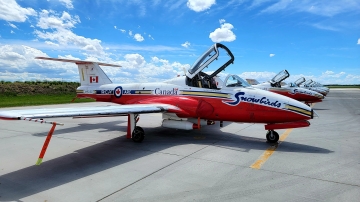 Canadian Forces Snowbirds painted a gold stripe sideline on its aircraft to mark their golden 50th anniversary and to pay a tribute to a former aerobatic team Golden Centennaires.

The team’s CT-114 Tutor aircraft will be flying theses colors for the all 2021 airshow season.

Golden Centennaires was the precursor of the current Canadian Forces aerobatic team – The Snowbirds.