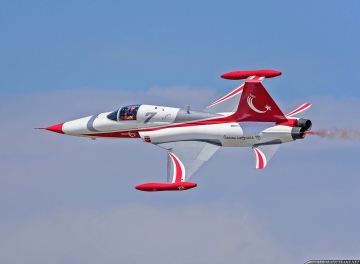 Today at about 14:15 local time, a Turkish Stars NF-5 aircraft crashed killing the pilot. The incident happened during training flight near the Turkish Stars home base Konya.
The pilot Capt. Burak Genççelebi was pronounced dead at the scene and did not attempt to eject.

The last fatal crash of the team was on March 2012, again during training flight at Konya Air Base.

No further details about the crash were announce yet.

The NF-5 aircraft is one of the oldest still flying jet fighter aircraft in the world. Flown by Turkish Stars aircraft were ex-Royal Netherlands Air Force (RNLAF) produced at the beginning of 1970s.