Blue Angels and Thunderbirds America Strong flyovers is now over 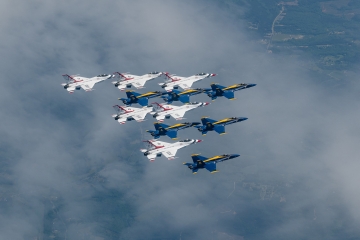 The great “America Strong” operation is now over with the last flyovers of US Air Force Thunderbirds at San Diego and Los Angeles on May 15.

“America Strong” is a collaborative salute from the Navy and Air Force to recognize healthcare workers, first responders, military, and other essential personnel while standing in solidarity with all Americans during the COVID-19 pandemic.

After these joint flyovers, both teams performed another flights separate from each other all over the USA.

Blue Angels ended their “America Strong” flyover on May 14 at Nashville and Little Rock, while the Thunderbirds at San Diego and Los Angeles on May 15. Thunderbirds ended their Los Angeles flyover with eight-ship formation in honor their teammate - #4 slot pilot “Cajun”, who lost his life in a crash on April 4, 2018.

“America Strong” was a great success to USAF and NAVY as these units raised the spirit of US citizens across the country. Millions not only from the ground, but also on television and internet watched the flyovers.

Not only Blue Angels and Thunderbirds performed flyovers as a part of “America Strong” operation, but a lot more USAF and US NAVY squadrons.