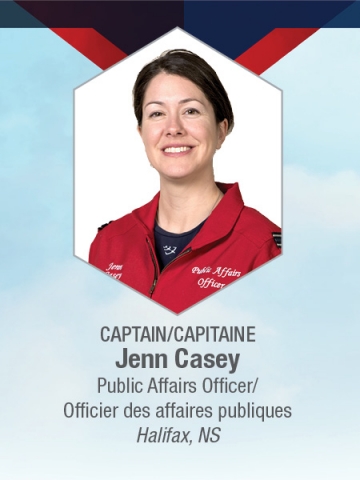 Captain Jenn Casey assigned as Public Affairs Officer was the only fatal victim of the Snowbirds crash that happen yesterday at Kamloops, British Columbia. Her chute failed to deploy.

She was on board Snowbird 11 Coordinator Captain Richard MacDougall who was the pilot. Captain MacDougall survived the crash with serious injuries, but are not considered life threatening.

Captain Jenn Casey was the first female to loss her life in Snowbirds history.

The Snowbirds were on a cross-Canada trip called Operation Inspiration, aimed at lifting the spirits of Canadians during the ongoing COVID-19 pandemic. The squadron flew over Kamloops on Saturday and was scheduled to head to the Okanagan on Sunday, but cloudy skies forced the team to change course for Vancouver Island.

Captain Jenn Casey is from Halifax, Nova Scotia. She joined the Canadian Armed Forces in August 2014 as a direct entry officer. Prior to joining she spent several years working in broadcast radio as a reporter, anchor, and producer in both Halifax, NS and Belleville, ON.

Her first assignment as a Public Affairs Officer was at 8 Wing Trenton, the Royal Canadian Air Force’s home of air mobility. She spent the 2018 season with the CF-18 Demo Team, travelling North America and the United Kingdom with the NORAD 60 jet. Captain Casey joined the Canadian Forces Snowbirds in November 2018.

We deeply sorry for her loss! R.I.P.