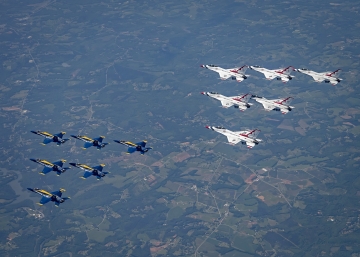 The US NAVY Blue Angels and USAF Thunderbirds will not fly together again during Operation America Strong until new order.

After the joint flyovers at New York, Newark, Trenton and Philadelphia on April 28 and Baltimore, Washington D.C. and Atlanta on May 2, the both US demonstration squadrons will flyover different locations separately.

First, the Blue Angels announced today their next flight locations - Dallas, Fort Worth, Houston and New Orleans on May 6.

The USAF Thunderbirds departed today to their home base Nellis AFB from Blue Angels home base – NAS Pensacola. Later today, the USAF Demonstration Squadron announced that there are no additional joint flyovers planned at this time. They will announce their next flyover locations within few days.