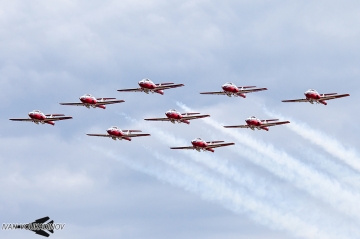 On Sunday, The Canadian Forces Snowbirds aerobatic team performed a series of flypasts (flyovers) as part of Operation Inspiration over Nova Scotia skies.

On May 3, Snowbirds fly over major cities of Nova Scotia as  Greenwood, Saint John, Fredericton, Truro and Halifax.

The team’s main goal was to raise the spirit of Canadian citizens after the coronavirus pandemic. For Nova Scotian residents, the flyover was aimed at honoring the victims of the helicopter crash and mass shooting.

On April 18 and 19, 22 people were killed by a gunman in and around the area of Portapique, N.S. On April 29, a CH-148 Cyclone helicopter deployed onboard HMCS Fredericton had crashed off the coast of Greece where six members of the Canadian Armed Forces were on board the helicopter.

The other flyover location and dates will be published soon. Stay tuned for more on Snowbirds Schedule Page.