The names of the Surya Kiran crashed pilots were announced 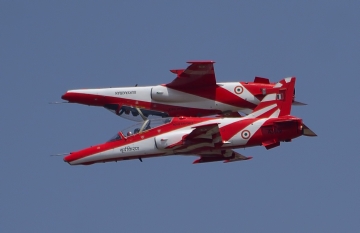 Following the todays crash of Indian Air Force aerobatic team Surya Kiran, the names of the involved pilots were announced.

The crash occurred early today, when two aircraft from Surya Kiran team collided in mid-air during a rehearsal flight in preparation for Air India Airshow, which start tomorrow.

The pilot who lost his life in the crash was Wing Commander Sahil Gandhi who was alone with the cockpit. The other two pilots, who ejected successfully from the other aircraft, were 2IC Wing Commander Vijay Shelke and Squadron Leader Tejeshwar Singh. Both ejected pilots have been moved to hospital with minor injuries.

The very strange coincidence was this crash as four years earlier the other aerobatic team collided in mid-air on the same date during the same airshow, but then all pilots landed safely – the story here.

Video of the collision: