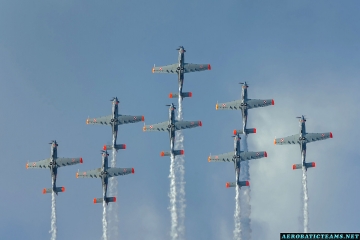 The Orlik aerobatic team's PZL-130 TC-I aircraft will received the upgrade to the TC II advanced version. The first four out of 12 PZL-130 TC-I Orlik aircraft based at the 42nd School Air Base in Radom, have already been transported to PZL Warszawa-Okęcie factory for their comprehensive modernization.

Wings, engines and propellers will be replaced, the fuselage and the engine housing will be modified. The cockpit also will be modernized. Existing avionics will be replaced by digital displays of flight parameters, engine operation, navigation and warning.

PZL-130 TC-II will also be equipped with new radio stations, warning systems about approaching terrain and air traffic to avoid collisions. In addition, they will also receive air-conditioning and completely new electrical installations.