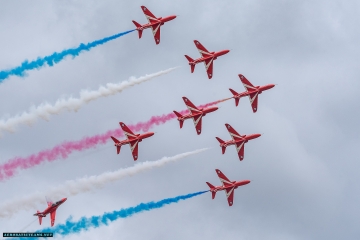 A new line-up of Red Arrows pilots who will be part of the team in the Royal Air Force’s 100th anniversary year has begun training.

Among those pilots joining is a new Team Leader – Squadron Leader Martin Pert, who will fly as Red 1. It is his second term with the Red Arrows, having been a team pilot between 2012 and 2014, and is now returning following a tour flying the Typhoon aircraft. Born in Scotland but educated at Parmiter’s School, Garston, Squadron Leader Pert was commissioned into the Royal Air Force in 2000.

He succeeds Squadron Leader David Montenegro, whose three-year tour with the team officially finishes this month.

Completely new to the Red Arrows, and flying alongside the six other pilots continuing from the 2017 line-up, are Flight Lieutenants Jon Bond and David Stark.

Born in Geneva, Switzerland, before moving to the UK, Flight Lieutenant Stark was educated at Nottingham High School. He joined the Royal Air Force in 2005. Flying the Tornado GR4 operationally, the 35-year-old, will be Red 3 for the 2018 season.

Also joining the team is a new Red 10 – the Squadron’s Supervisor – and the first change in this position since 2011. Squadron Leader Adam Collins takes over this safety role, which also involves commentating on the team’s display at shows, from Squadron Leader Mike Ling, who completed a record six consecutive seasons. Red 10 is the team’s Supervisor for all practices and displays, maintaining radio contact with Red 1 from the ground. He also coordinates the season, takes the spare aircraft between locations and flies the team’s photographers.

Squadron Leader Collins attended Solihull School in the West Midlands, where he was a member of the Combined Cadet Force and received an RAF Sixth Form Scholarship. He went on to study aeronautics and astronautics at Southampton University and was a keen member of the University Air Squadron where he flew the Bulldog at Boscombe Down. After completing fast-jet flying training, Squadron Leader Collins’ first operational tour was flying the Tornado GR4.

A former Red Arrows display pilot has also recently returned to the team to take overall responsibility for the Squadron. Wing Commander Andrew Keith officially took over as Officer Commanding, Royal Air Force Aerobatic Team (OC RAFAT), in August – succeeding Wing Commander Martin Higgins. He is responsible for the Squadron’s flying, engineering, administrative and safety matters. Wing Commander Keith was commissioned into the Royal New Zealand Air Force in 1994 and gradated as a fast-jet pilot. He transferred to the Royal Air Force in December 2001, completing frontline tours flying the Harrier and was selected to be a Red Arrows pilot from 2007 to 2009.