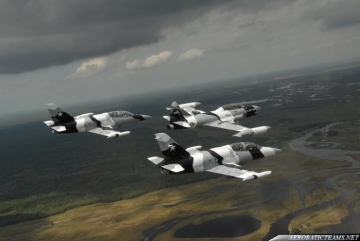 A new civilian jet aerobatic team is formed. Heavy Metal Jet Team will be a five-ship aerobatic civilian jet team and will be fully sponsored by United Bank Card, Inc (UBC) for its first year. The team use four L-39 Albatross and one T-33 all in the arctic camouflage paint scheme. The Heavy Metal Jet Team is based in Lancaster, and will be available to air shows, private events and flyovers from March 2011.

A couple of veteran air show performers and International Council of Air Show members will hold key positions on the team. Heavy Metal Jet Team Lead Pilot will be Lt. Colonel Jerry "Jive" Kerby, USAF (ret.) and Featured Solo Performer in the single T-33 will be Captain Dale "Snort" Snodgrass, USN (ret.). Kerby and Snodgrass currently make up the two-ship civilian jet team Team MS760. Kerby was the first USAF F-4 Phantom Heritage Flight pilot in 2005 and has also flown the Vintage Thunderbird T-33 for the past five years. Snodgrass is well-known from his days as the F-14 Tomcat Demo Pilot and continues to fly with both the USAF Heritage Flight and USN Legacy Flight programs. Snodgrass recently flew the F-86 Sabre painted in Skyblazers colors. With over 20,000 hours of flight time and 25 years of air show experience between them as well as military flight training in the F-15 and F-14, Kerby and Snodgrass bring a solid base of skill, expertise, and showmanship to the new team.

In addition to Kerby and Snodgrass, Isaacman will be joining Heavy Metal Jet Team, not only as an owner but as the right-wing pilot. Isaacman began flying over four years ago and has accumulated over 2500 flying hours, predominately in jet aircraft. Isaacman is type-rated and qualified in over 20 different corporate jets as well as experimental aircraft such as the L-39, T-33, and A-4 Skyhawk. The remainder of the team's pilots will be announced when the team's Web site goes live on Monday, December 6 at the International Council of Air Shows Convention in Las Vegas, Nevada.

Heavy Metal Jet Team's Manager and Narrator will be LM "Lunar" Sawyer. Sawyer will manage the team's booking schedule and marketing as well as serve as the team's narrator. Sawyer brings 12 years of air show marketing and management experience as well as five years of narrating experience to the team.