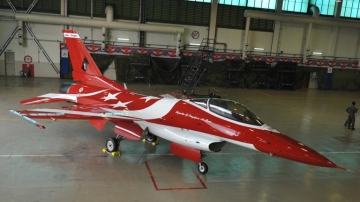 Republic of Singapore Air Force aerobatic team Black Knights received new paint scheme in which they will perform at Singapore Airshow in February 2014.

The first demonstration with six F-16C was at Singapore Airshow 2008.

Since then the team were temporarily disbanded until yesterday, when Chief of Air Force Hoo Cher Mou unveiled the Black Knights team at the Tengah Airbase. He presented the first painted F-16C in new colors carrying number 1 at the tail.