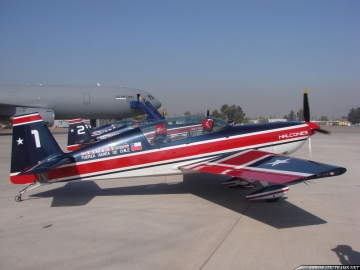 Two members of the Chilean Air Force aerobatic team "Halcones", died in crash on March 15, at Quintero Air Base, 70 miles northeast of Santiago. The crash occurred at about 10:30 a.m. local time during routine training flight. Both occupants Capt. Eduardo Varas de la Fuente and mechanic Cristian Garcia died at the scene. The cause of the EXTRA 300L aerobatic plane crash is still unknown and is under investigation.

Varas flew as Halcon #5 and this was his second incident unfortunately, this time fatal. On 20 July 2009, he survived a crash during a demonstration at Santiago. The accident occurred at 14:15, when the aircraft experienced engine problems. Lieutenant Eduardo Varas subsequent actions avoided further tragedy when he turned his aircraft away from a nearby fish terminal and instead crashed at side of the "Panamericana Sur" highway. He was rendered unconsciousness with minor injuries and he was taken to hospital by a Chilean Air Force helicopter. After recovering from his injuries, Lieutenant Varas resumed his duties as a "Halcones" pilot.